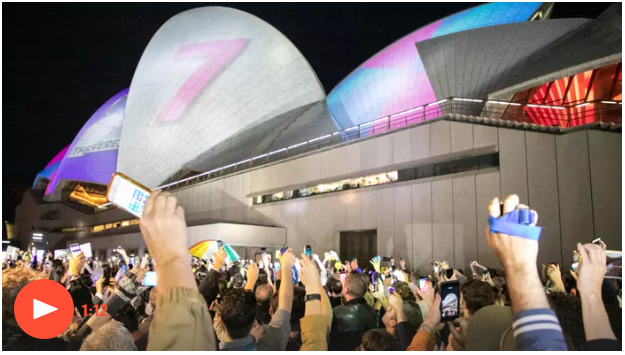 Hundreds of demonstrators gathered at the Sydney Opera House with torches in hand to disrupt and protest the controversial projection of the barrier draw for the Everest horse race on the sails of the country’s most recognisable building.

The protesters shone torches onto the world heritage-listed structure, seeking to interfere with the display, and chanted “not for sale” and “whose house? Our house”.

Demonstrators protesting against the decision to project the barrier draw results for the Everest onto the sails of the Sydney Opera House. Photograph: Paul Braven/EPA

The protest came after almost a week of heated debate about Racing New South Wales’ planned projections, which were backed by the NSW government last Friday after concerted pressure from the Daily Telegraph and 2GB broadcaster Alan Jones.

More than a quarter of a million people signed a petition calling on the state government to reverse its decision.

A sizeable police presence patrolled on land and water, while riot officers cordoned off some areas closer to the water.

The protest was mostly good-spirited, though. When the sails finally lit up at about 7.40pm the crowd erupted in a chorus of boos, chanting “not a fucking billboard”, “boring” and “the graphics are shit”. 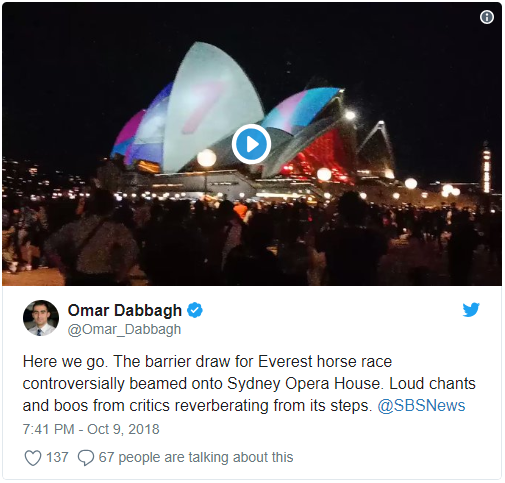 Wendy Aylward, from Arncliffe, told the Guardian she came to the protest to send a message to the government.

“We’re all here to show how strongly we feel that the Opera House should not be used in this way,” she said. “I personally think Alan Jones’ influence is overstated, but I’m really concerned about the commercialisation of the building.”

Her friend Jo Fraser, from Enmore, added that politicians seemed to have misjudged the opposition to the projection. 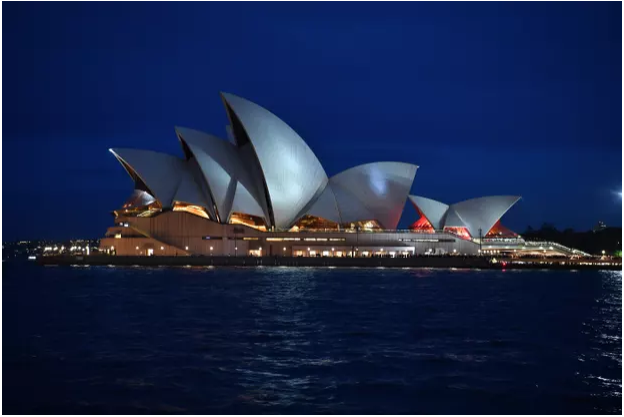 “I mean when the prime minister calls [the Opera House] a billboard it’s a bit of a worry,” she said.

“I’m not against things like the Wallabies or the rugby league being celebrated [on the sails] but it’s a bit different. I mean it’s a barrier draw. Why else do you care about barrier draws except for betting? I think it’s a really slippery slope.”

Citing security concerns, Racing NSW had held the official barrier draw in secret earlier on Tuesday and suspended betting on the race, undermining the original intent of the light display.

The torches – and what appeared to be floodlights coming from behind the Harbour Bridge – were no match though for the projections coming from the passenger terminal on the opposite side of Circular Quay.

The projection lasted about half-an-hour an ended to a raucous round of cheers and more chants of “we love you Louise” – a reference to Opera House chief Louise Herron, who opposed the display. 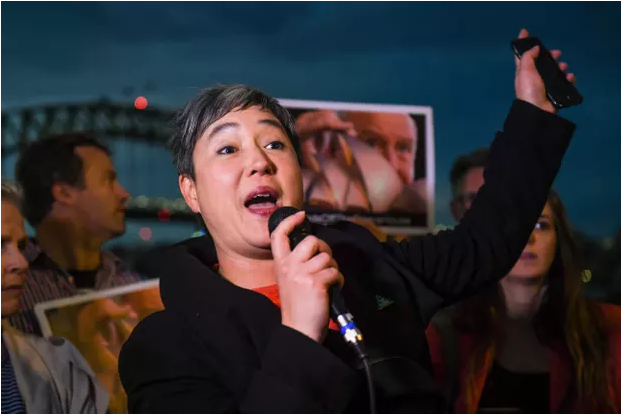 Before the display, Newtown Greens MP Jenny Leong spoke at a brief media conference, saying the protestors had “drawn a line in the sand” and were standing up to “a shock jock who runs this city”.

“People have said enough to bullies, enough to the idea that people with power can buy this city,” she said.