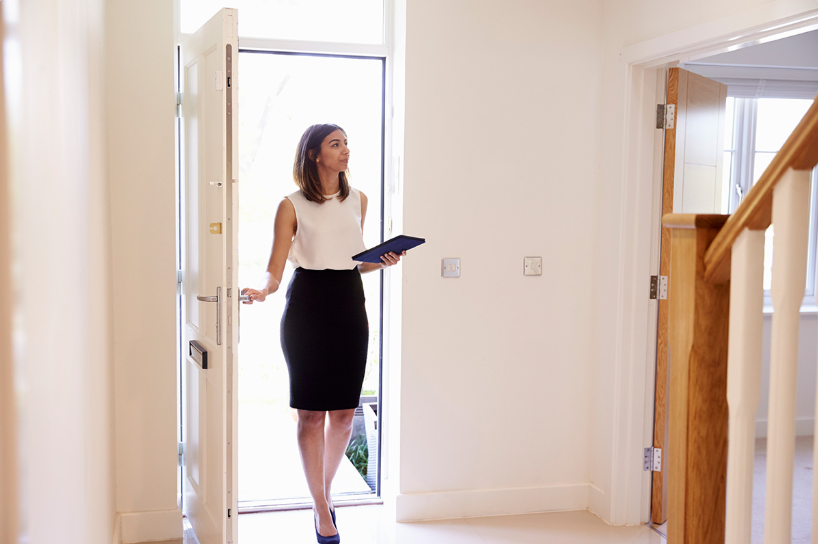 The auction market over the 2018 year to date has consistently weakened, with clearance rates reducing from the low 60% range to trend below 50% in October. The highest clearance rate for the year was back in late February (66.8%), and as clearance rates progressively decline; the spring selling season was highly anticipated as a test of market conditions.

Traditionally coming out of winter, the months following are usually seen as an optimal time to sell, with an increase in both the number of newly advertised homes for sale and weekly auction volumes. However, while we’ve seen the usual seasonal uplift in the number of homes being auctioned, auction volumes are tracking at their lowest level over the spring to date period this year relative to the same 8 week period over the past 5 years, while the combined capital clearance rate has seen further softening with less than half of homes selling at auction over the past 4 weeks. The last time auction conditions were quite this sombre was in 2012, over what was the last significant market downturn, highlighting the correlation between property values and clearance rates as a timely indicator on market conditions and sentiment.

To further understand this timely indicator, we take a look at each of the capital city auction markets over the spring season to date and the equivalent period last year.  With weekly results showing a divergence across the property types we analyse the performance year-on-year across houses and units. 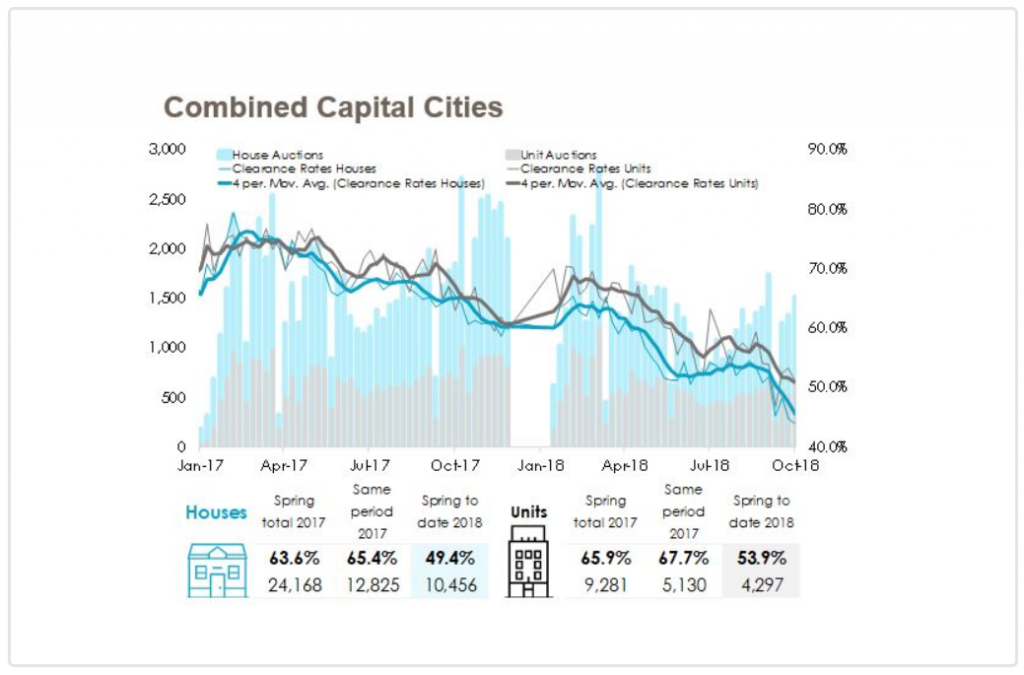 Combined Capital Cities
Across the combined capital cities, 53.9% of units have sold at auction over the past 8 weeks, while half of the houses taken to auction over the same period have failed to sell (49.4%). In 2017 a similar trend was evident, in that, units were more successful at auction, however this variance is more apparent as of late with 4.5% more units selling at auction than houses over the spring season to date compared to the 2.3% difference over the same period in 2017. However, it’s important to note that units account for a smaller proportion of overall activity.

Both volumes and clearance rates were significantly higher across both house and unit markets over the 8 week period in 2017, with 12,825 houses and 5,130 units taken to market across the capital cities, with 65.4% and 67.7% selling respectively.
The lower year on year results is hardly a surprise given home values have been in decline for 12 consecutive months now, and if our weekly clearance rates over the past 4 weeks are any indication it’s likely this will weaken further. Final results last week saw only 44 per cent of houses successful at auction, while a higher 51% of units sold across the combined capital cities. 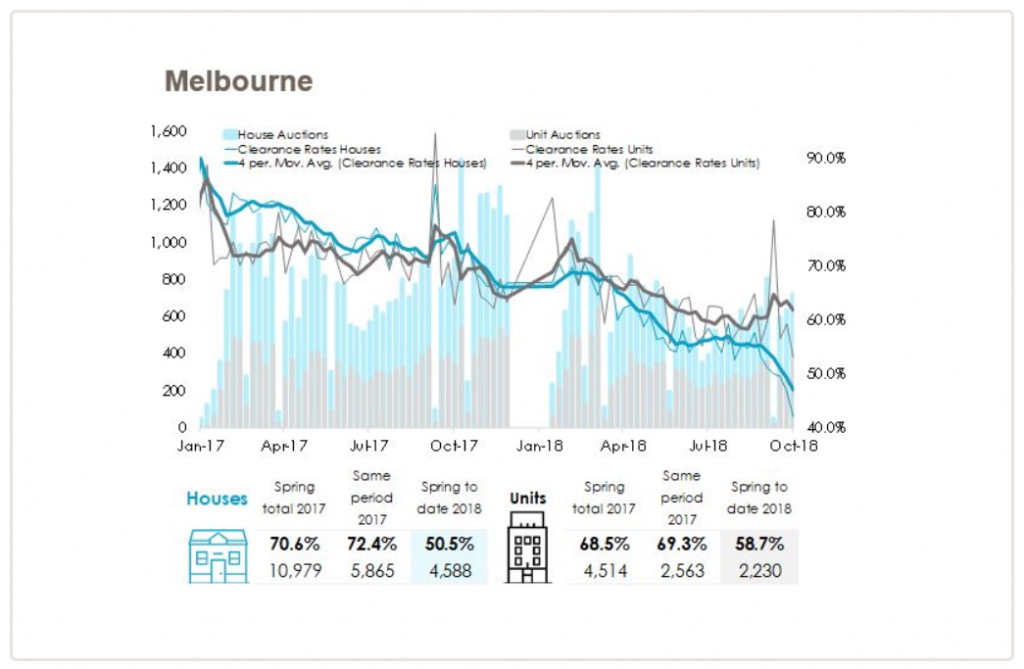 Melbourne
Across Australia’s largest auction market of Melbourne the performance across the individual property types year on year is quite interesting, with clearances rates tracking higher for houses compared to units for most of 2017, while this year has seen results in contrast of this with units the better performer.  There were 4,588 houses taken to auction over the past 8 weeks with just over half selling (50.5%), while units show a higher 58.7% success rate across 2,230 auctions so far this spring. Over the corresponding period last year, a significantly higher 72.4% of Melbourne houses sold at auction and units saw a clearance rate of 69.3%, which happened to be over the period just prior to the peak in Melbourne dwelling values.

Sydney
In Sydney, the gap between the performance of clearance rates across the property types has reduced over recent months. So far this spring 3,581 Sydney houses have been auctioned with 47.2% selling, which was lower than the 50.1% of units that sold over the same period, however not quite as disparate to one year ago.  Last year, over the same 8 week period 61.8% of houses sold and a higher 68.7% of units sold. Volumes were considerably lower year-on-year across both the house and unit market of Sydney.

Across the smaller auction markets, auction volumes and clearance rates are lower across all markets with the exception of Canberra, where volumes are higher across both the house and unit markets and the clearance rate for units is higher over spring so far relative to the same period last year. 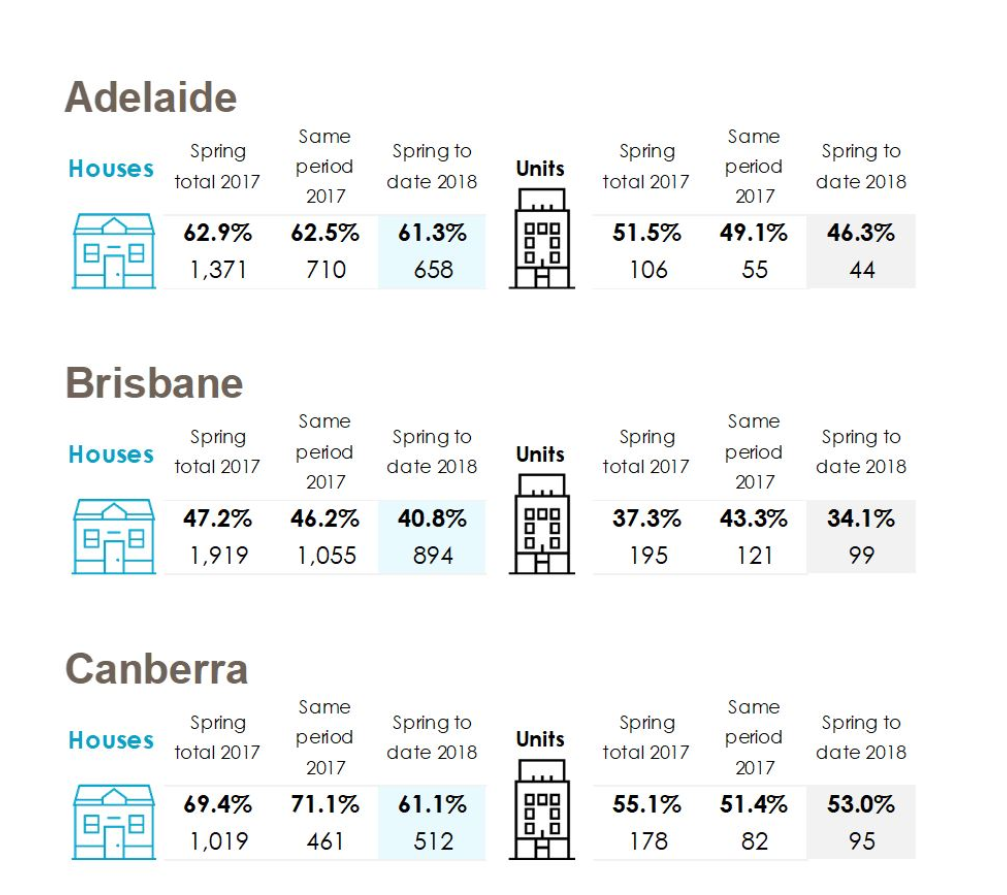 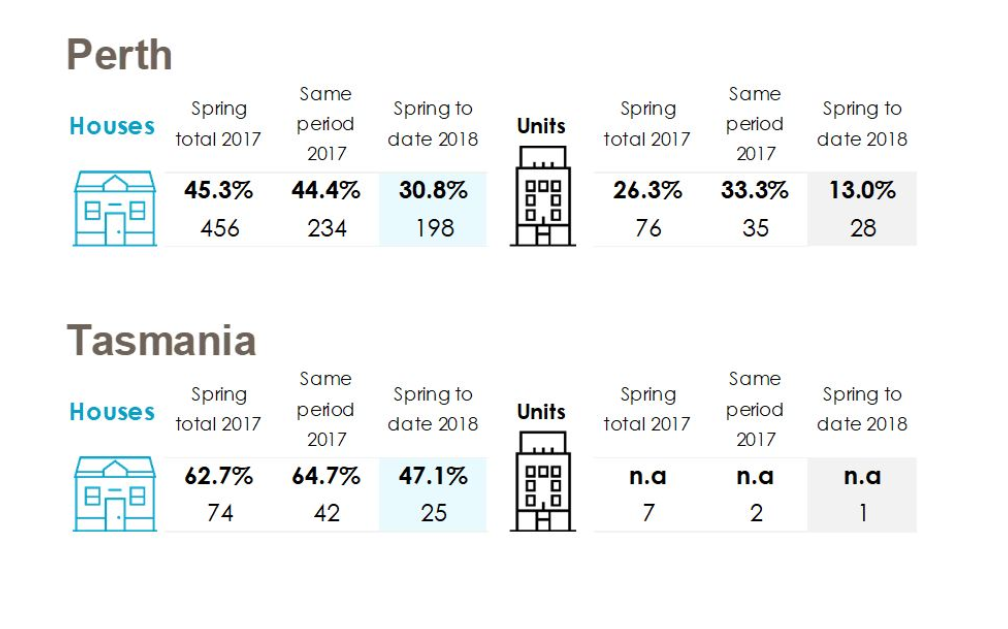 Across the smaller auction markets, auction volumes and clearance rates are lower across all markets with the exception of Canberra, where volumes are higher across both the house and unit markets and the clearance rate for units is higher over spring so far relative to the same period last year.

In Adelaide, while year on year volumes are lower, clearances rates are only slightly lower across both houses and units over spring so far compared to last year.  658 houses have been taken to market across Adelaide so far this spring with 61.3% selling,  which is only slightly lower than the 62.5% last year when a higher 710 auctions were held over the same period. Units have seen 11 fewer auctions held year on year, with 46.3% selling, compared to the 49.1% sold last year.

Brisbane has seen 894 houses and 99 units taken to auction so far this spring, returning a clearance rate over the period of 40.8% and 34.1% respectively, which is lower than over the same period last year when 1,055 houses across Brisbane went under the hammer and 46.2% cleared, and 43.3% of the 121 units that went to auction sold.

Canberra was the only auction market that saw a higher volume of auctions this year compared to the same 8 week period last year across both houses and units, with 512 houses taken to auction over spring so far and 95 units, where 61.1% and 53% sold respectively, with Canberra units being the only market where the clearance rate improved year on year. However, volumes across Canberra are very low particularly across the unit market.

There were 198 Perth houses and 28 units taken to auction over the last 8 weeks, with a clearance rate of 30.8% and 13%, with both clearance rates and the number of auctions were lower compared to last year.

Activity across Tasmania is generally quite subdued, with the majority of auctions being for houses where volumes are down more than 40% year on year, with only 25 auctions held over spring so far and only half of which sold, compared to the 64.7% that sold last year when volumes were higher.