Developers are offering more incentives to attract buyers as the market cools.

Stamp duty rebates, frequent flyer points and strata levy payments are just a few of the bonuses developers are putting on the table, in a bid to attract more buyers in a cooling market.

With a record number of apartments being delivered at a time when tighter lending restrictions and the banking royal commission are taking their toll, developers are doing what they can to stand out.

“The practice [of offering incentives] has increased to get rid of stock,” said Leigh Warner, national director and head of residential research at global property firm JLL, off the back of the release of their latest quarterly Apartment Market Report. 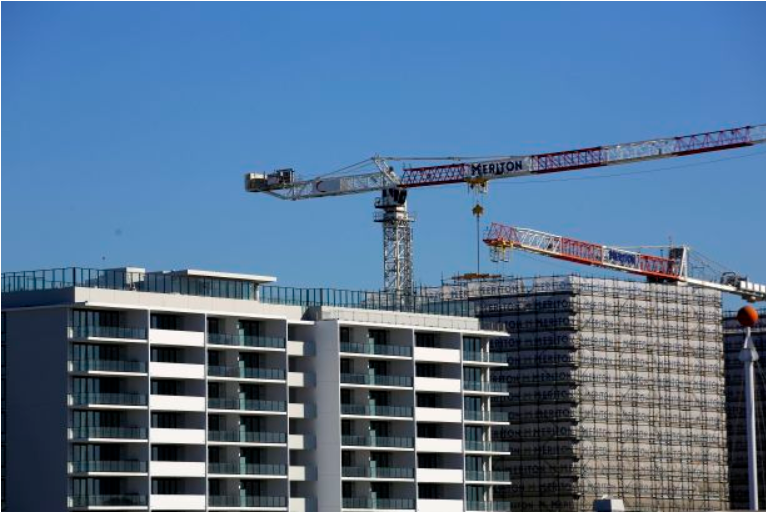 The number of units under construction has fallen to below 15,000. Photo: James Alcock.

“It’s a continuation, but also an acceleration,” said Mr Warner of the fall in unit sales, and added apartment prices were expected to continue to decline over the next 12 months before bottoming out.

Mr Warner said apartment prices were holding up better than house prices — as reduced borrowing capacity was limiting more buyers to apartments — but the softening market made it harder to get new projects off the ground.

“There’s a little bit of a developer caution,  but a lot of that is really forced. Pre-sales hurdles aren’t being met because of slow sales rates and banks are being quite tight in their requirements in terms of pre-sales … they’re wanting even more of their risk covered.”

Fewer projects are now reaching the construction stage, with the report showing the number of units under construction has fallen to below 15,000.

Mr Warner said some developers were also downsizing. “Really large projects focused on the investor market just cannot go ahead at the moment … what is going ahead are projects that are smaller, more manageable, for which it’s easier to meet those pre-sale requirements, projects that are more targeted at owner-occupiers.”

Sydney’s property downturn has some way to go.

“A few years ago at the peak of the market, which was fuelled by Asian buyers and investors there was an unlimited appetite for larger scale developments,”said Dennis Vertzayias, head of residential NSW project marketing. “But as the regulations have tightened, now restricting these sectors from entering the market, we have seen some larger scale development sale volumes noticeably impacted.”

While the supply pipeline is expected to fall away quite sharply in 2019, Mr Warner said unit completions were still set to peak in 2018.

An extra 3134 apartments entered the market over the latest quarter, bringing the total number of units completed this year to 7502 — more than half of which has been in the inner south.

The region will also see the bulk of projects to come, with more than a third of the extra 25,700 units to be delivered by 2020 also in the inner south.

At other developments Mirvac is offering up a “no fuss investor package” which includes a rental guarantee, furniture pack and other household items, while Meriton is offering a 75 per cent stamp duty refund to buyers.

Mr Warner said rather than risk reducing the value of their projects by offering price discounts on properties, developers were increasingly trying to lure local buyers by offering up a variety of incentives.

The positive for buyers was that developers were facing more pressure to deliver quality stock, according to Mr Warner.

“At the heat of the market … people were paying big money for anything, now there is less buyers around, less competition, buyers can be more discerning.”