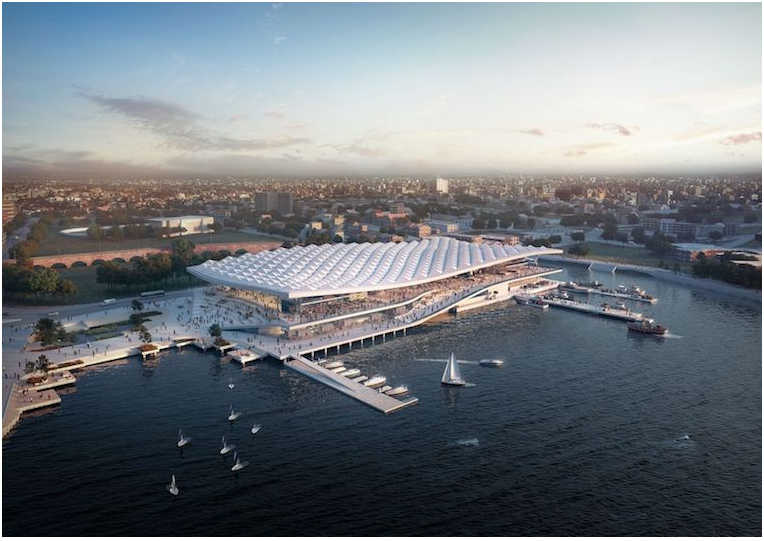 Nothing says Sydney lifestyle quite as exuberantly as its fish markets. On any day it typically hosts a swarm of humanity, feasting the senses and tempting the appetite. So a redevelopment of its crusty old buildings has been high on the agenda for the NSW government, in particular because of its premium location at Blackwattle Bay, on the edge of the CBD and in the emerging residential hot spot of Pyrmont.

Finally, this week, a Danish architect handed Sydney a beautiful new design for the Fish Market, complete with a dramatic roof to suggest movement of water and fish scales.

An open foreshore area will reconnect both sides of the bay.

The original brief, said Kim Nielsen of Danish architects 3XN, which is designing the building in partnership with Sydney firms BVN and Aspect Studios, was a fully airconditioned building. But with the studio’s homeland in Denmark insisting on progressively tougher environmental standards for buildings, this didn’t come as a natural option.

Only essential areas will be airconditioned, Nielsen told The Fifth Estate on Tuesday.

But the roof is the biggest question.

It’s designed to capture breezes and send them through the building’s various areas, including an auction room, wholesale area, retail and dining.

With the huge refrigeration needs of a fish market, though, isn’t that attractive wavy scale and vast design a missed opportunity to maximise solar and minimise the energy consumption?

The media release refers to the material as aluminium.

“The building will feature a unique timber and aluminium roof inspired by fish scales floating over the building like a canopy and be home to an expanded seafood cooking school, food kiosks, restaurants, bars and outdoor spaces for social events,” the government media release said.

Nielsen told The Fifth Estate it would incorporate solar.

“The roof is an important thing for the building; it’s not a completely enclosed building so it’s a cover.”

The design is based on natural ventilation, so it has “scales on top where fresh air comes in and out.”

“And the roof is a big timber construction.” There will be “movement” in the design of the roof.

It will also collect rainwater for use in the building, and filtered to create ice.

“We’ve done it in a pragmatic way, economically practical as well. So it’s a win-win situation,” Nielsen said.

And of course it will have solar panels, Nielsen said, but with those unusual shapes what kind of material would they be? Something flexible The Fifth Estate supposed.

“Australia is at the forefront of solar panel technology and of course we will use some of that,” Nielsen said.

… on the lower floors and where the auction is held; where the fish are, because then we can limit the energy to that.”

UrbanGrowth NSW Development Corporation that is managing delivery of the project advised that more details of the sustainability and energy strategy would be released at development application stage.

Later an email from UrbanGrowth told The Fifth Estate it was “committed to delivering a purpose-built facility that can achieve a 5 Star Green Star rating.

“As such, we are working closely with our lead architects 3XN/GXN/BVN to reduce greenhouse gas emission through a considered ecologically sustainable development approach which includes a suitable renewable energy strategy.

“Currently, our design team has identified an opportunity for solar generation from the roof that is both flexible and generates renewable energy through solar panels.

“The photovoltaic application would generate a minimum of 5 per cent of the energy demands of the new facility through renewable energy. Ideally we would like to generate a greater percentage of renewable energy through the solar panels and are further investigating opportunities to use different materials to achieve this.”

“From a design point of view it’s a good story,” Nielsen said. “What we’re trying to do here is an authentic fish market.”

“When we talk about sustainability; we talk about it as a holistic thing.” By which he means how the building will be integrated into the community and become a focus point for it.

Other work in Australia

3XN is not new in Sydney and certainly Nielsen isn’t. He’s been to Australia “about a hundred times” with his firm’s work on AMP’s new tower at Circular Quay as well as a new building under wraps in Sydney and another project in Melbourne.

For a Danish architect, sustainability is hardly anything radical. It’s built right into the system in Denmark, Nielsen says, and the building codes get tougher all the time.

“Denmark is maybe at the forefront of sustainability. We get 60 per cent of our energy from windmills.” But the energy needs are also huge, with central heating high on the agenda.

“Aside from that our building code every second year is tightening up to make buildings more and more sustainable. It’s challenging sometimes.” The standards for even ordinary buildings are pretty much on a par with LEED Platinum.

Triple glass is common, but then it’s a colder climate where the challenge is to keep the cold out; in Australia, he says it’s more about keeping the cool in.

The studio, which now has a permanent Australian office, also has a project “slowly” emerging in Melbourne, and another in Sydney.

The project is estimated to be a $250-million revamp that will achieve a 5 Star Green Star rating.

It would be “a world-class tourist attraction, with the stunning complex not only reinvigorating the CBD location, but embracing energy efficiency and water and waste-saving measures.

A statement from the GBCA said the design incorporates “energy-efficient environmental design that utilises the sun, greenery and prevailing winds; innovative systems to minimise consumption and utilise waste outputs; productive landscapes and biodiverse aquascapes where native flora and fauna will help in the filtration of water and the remediation of soil; and waste being treated as a resource, with the collection and recycling of fish offal.”

“A sweeping roof has been designed to create a warm and inviting space that will serve to harvest rainwater and capture solar energy.”