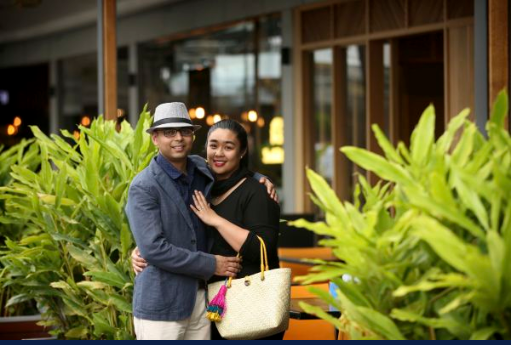 Geicy Sharma and her husband Puneet Sharma in Blacktown, where they have bought an off-the-plan apartment which will be ready in 2020. Photo: James Alcock

Derided and maligned, Blacktown has had its knockers, but these days it’s swapping white bread for naan bread.

The second-largest local-government area in NSW has a long history of being the new home for migrants from all corners of the globe, with about 80 per cent of its residents speaking a language other than English.

But it is hoped a recent flurry of development in this suburb 35 kilometres west of the CBD will attract even more people to Blacktown and offer its diverse group of residents places to work and play within the town.

Nearly two-thirds of its residents travel out of the area to work, with just 44 per cent of the population working in Blacktown City.

Western Sydney Chamber of Commerce chief executive David Borger said the change in both the size and the makeup of the population was one of the main drivers of change.

“It’s far more diverse than it was 20 years ago when it was mainly British and working class. It’s gone from white bread to naan bread,” he said.

“It’s also an affordability issue. People are seeking out these interesting downtowns [to live in]. It’s got a good train system and it’s still affordable – not for everyone, but for many,” he said.

Local nurse Giecy Sharma moved from the Philippines to Blacktown to be closer to her parents several years ago.

She recently bought a $600,000 apartment at Inspire Blacktown, after three years of house-hunting, because of its proximity to her job at Blacktown Hospital and the surrounding amenities.

Access to the first-home buyer’s grant and a stamp duty discount meant the apartment was within her price range.

“This saving gave us a terrific head start and made buying our first home at this age possible. We just can’t wait to move in,” Ms Sharma said.

Long-term resident and recently elected councillor Kevin Gillies said he remembered a time when Blacktown was considered the outskirts of the Sydney, with large rural blocks and old fibro houses.

Now, there’s a real mix of housing and the local hospital has undergone two major redevelopments in the past two decades. It’s a testament to the rapid change Blacktown is experiencing, Cr Gillies said.

“It has been a major growth area and young families moved into the area because it was the only place you could afford to buy houses,” he said.

Now a whole range of other groups, including young professionals like Ms Sharma, are moving into the area and more growth is on the cards with the population forecast to rise from 340,000 to 522,000 by 2036.

“We’ve got 188 different nationalities in the Blacktown LGA and we’re only seven nations short of the UN,” said Cr Gillies.

He said he was part of a council which wanted to play to the strength of a changing population by complementing the demand for housing developments with a range of other infrastructure projects such as a sporting centre of excellence and a university campus.

“The idea is to develop the community so that people not only want to live here but they get the opportunity to get the best benefits,” said Cr Gillies.

Western Sydney “has got lots of economic grunt – its best days are ahead of itself,” Mr Borger said.