Australia’s economy has slowed further, with GDP growth tumbling under 2 per cent over the past year.

The economy grew at 0.4 per cent in first three months of the year, to be up 1.8 per cent over the year — the slowest growth since the September quarter in 2009.

While the quarterly figure was a step up from the moribund 0.2 per cent growth in final quarter of last year, it still fell below market expectations.

It was also much weaker than the 1 per cent growth recorded in the March quarter last year. 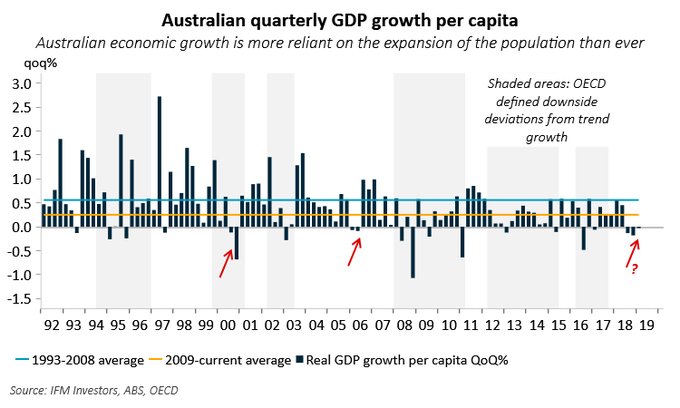 The result was dragged down by weak household spending, slowing further from last year and up just 1.8 per cent over the year, with households cutting back on their discretionary spending, particularly in new household items, recreation and hospitality.

However, spending rose in non-discretionary, essential areas such as insurance, power and health.

The rapidly cooling residential construction sector was also a significant drag, with dwelling investment falling 2.5 per cent over the quarter having been at record levels in late 2018.

The main driver in the weak growth profile was government spending on such things as health, aged care and the NDIS.

Overall government spending grew by 0.8 per cent over the quarter and 5.1 over the year.

Capital Economics analyst Ben Udy said the economy is “off to a rough start in 2019”.

“And, given that the housing downturn has so far continued in 2019, we don’t think that weakness was a one-off.

“And with less growth in consumption, households seemingly chose to put any extra income towards their savings, that led the saving rate to edge up.

“We suspect this is a consequence of the decline in household wealth due to falling house prices.”

However, Citi economist Josh Williamson noted part of the problem was household income was increasingly falling behind company profits as a share of the economy.

“GDP benefits [are] still accruing to owners of capital, not workers,” Mr Williamson.

“Most industry sectors grew in Q1, which contributed to corporate profits as a share of GDP returning to the high of 29.1 per cent.

“On the other hand, wages as a share of GDP eased slightly to 51.8 per cent, close to a multi-decade low.”

AMP Capital chief economist Shane Oliver said the risks were mounting against Australia’s record run of 28 years without a recession.

“While the near-term outlook for growth still looks positive as the various parts of the economy muddle through, the outlook for 2020 looks challenging as government infrastructure spending looks like it will slow after this year, residential construction looks likely to continue to decline, the consumer is expected to remain weak and risks are building around the global economic outlook as a result of Trump’s trade wars,” Dr Oliver said.

Labor’s treasury spokesman Jim Chalmers said the nation was already in a recession of sorts.

“Australia finds itself still in a per capita recession, this is the third consecutive quarter that we have had that measure go backwards and that’s the first time this has happened since the recession of the early 1980s,” he said.

“That’s just how bad a job this Government is doing of managing the economy in the interests of middle Australia.

“We have got people squeezed by the fact that wages in the measure today are growing just an eighth of the pace of company profits.”

However, Treasurer Josh Frydenberg said the GDP result was “within the range of market expectations” and strong employment growth means a record number of Australians have jobs.

“The proportion of working-age Australians on welfare now is at a 30-year low.”

Mr Frydenberg said the Government’s planned tax cuts should also give the economy a boost after July 1.

“The personal income tax cuts announced in the budget, along with yesterday’s decision by the RBA, to cut interest rates will provide a timely boost to household disposal income,” he added.

Australia is also witnessing ongoing and significant slump in productivity according to the National Accounts.

Gross value added for each hour worked in the market sector fell by 0.5 per cent in the March quarter, to be down by 0.9 per cent on the year.

“It remains unsurprising the RBA governor continues to implore the government to do more on infrastructure and in the productivity enhancing reform space,” Dr Joiner said.

Dr Joiner said the deceleration of productivity growth is hurting both the broader economy and suppressing wage growth.

“Reducing regulatory barriers, meaningful and fair tax reforms, encouraging investment in technology and investing in skills and education will deliver improved living standards over the long-term.”

Dr Joiner said while many of the reforms are long dated and come without cost, they are often difficult politically.

“If it can produce more and get greater productivity in the workplace, it will lead to workers accessing higher wage growth.”