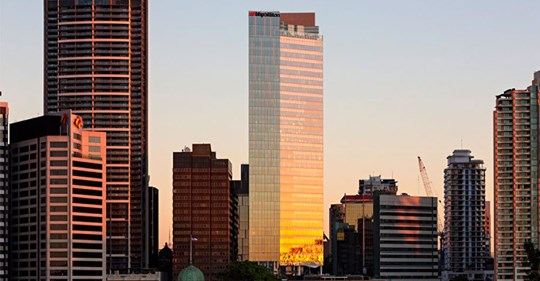 A dispute between two of Australia’s best-known property companies has boiled over into public after builder Grocon put two subsidiaries into voluntary administration in the middle of a court battle with Dexus over a $28 million lease claim against it by the country’s largest office landlord.

Grocon executive Daniel Grollo on Friday called the decision to put the two units into adminstration regrettable but said he was forced to do it after Dexus – whose attitude he called “unreasonable and disappointing” – escalated its demands for payment even though a court process was continuing.

A Grocon spokeswoman declined to give more detail about the demands the company said Dexus had made.

“I don’t think we want to go in to specifics on that,” she said.

The dispute arises out of unpaid lease obligations stretching over three years Grocon had to Dexus over commercial space it occupied at 480 Queen Street. Dexus said it and Grocon entered had an agreement to restructure and extend the payment terms, but that Grocon had not complied with the agreement.

Dexus took Grocon to the Federal Court in Victoria in February and the two parties were due to go to the Federal Court of Appeal next month. Dexus, which says it expected judgment to be handed soon after the November 22 hearing, accused Grocon of avoiding judgment by putting the two entities, Grocon Constructors (Qld) Pty Ltd and Grocon Constructors (Vic) Pty Ltd, into administration.

Dexus’ general counsel and company secretary Brett Cameron said Grocon “appears to be seeking to avoid the court hearing by winding up these entities.”

Grocon also developed the office tower, which it sold to Dexus and the Dexus Wholesale Property Fund. In a matter unrelated to the $28 million spat, The Australian Financial Review’s Street Talk column last year reported that Grocon was pressured by rental guarantee obligations it had relating to the “lease tails” of tenants it drew out of other buildings to 480 Queen Street.

Grocon suffered a $27.5 million loss in the 2017 year, prompting auditor PwC to report that “material uncertainty” cast doubt on its ability to continue as a going concern.

The privately owned builder on Friday said it had appointed John Park of FTI Consulting in Brisbane, as joint and several voluntary administrator of two subsidiaries.

Grocon said it both subsidiaries were dormant and had no employees. Their administration would not affect the builder’s other projects, including The Ribbon in Sydney and Northumberland in Melbourne, it said.

“Grocon has developed and constructed billions of dollars of real estate for Dexus over the years and its attitude to this matter is both unreasonable and disappointing,” Mr Grollo said.

“Unfortunately, Dexus’ reluctance to wait until the Court matter is concluded, means that Grocon has been left with no choice. The voluntary administration process will ultimately resolve the situation.”

The Australian Financial Review in 2017 reported that a steel-fixing subcontractor filed for bankruptcy after Grocon failed to the $600,000 it owed E&S Reinforcements over the construction of 480 Queen Street. The Construction, Forestry, Mining and Energy Union said Grocon had not paid several groups of sub-contractors in Queensland for six to eight months.